How to Detect Identity Theft

I’m thrilled to announce that I just released my new book, How to Detect Lies, Fraud and Identity Theft.  I thought you’d enjoy a quick excerpt from the identity theft chapter.

How to Detect Identity Theft and Fraud

“The biggest lie ever: I have read and agree to the terms of use” 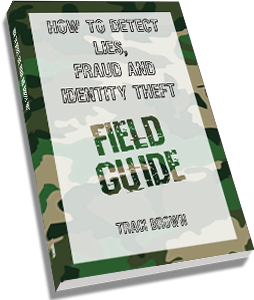 The crimes we hear so much about these days are usually cyber crimes – someone intercepts a wire transfer for your mortgage down payment or opens a credit card, online, in your name and goes on an internet shopping spree. What we don’t hear about is how much financial crime happens in person.

There are countless incidents of in-person fraud and identity theft. Folks who aren’t who they say they are go into banks all the time and apply for credit cards, apply for loans, and open accounts. Payday loan stores give loans to people who fake their identity all the time. Business owners who actually are who they say they are may show up to their loan appointment with a fake profit-and-loss statement.

How can you detect these thieves that are right in front of you?

According to master interrogator, Stan Slowik, ask a string of questions that are increasingly more complex that only the actual person will know. Hopefully, you already know the answers to them. If you notice hot spots as the questions get more challenging, they may not be who they say they are. If you don’t see any hot spots, their answers are either all true or all lies. According to Stan, what shifts the most as the questions get more detailed is their timing.

The actual person should have spontaneous answers to questions like, “Where do you live now?” “Where did you live in the past?” “What’s your mom’s maiden name?” and “What’ your dog’s name?”

Fortunately, many of these types of questions are on any application. If the application is on paper, get them to fill it out and, then, just casually verify the answers when you talk with them. And if you start up a friendly conversation to add in some extra questions, that helps, too. Here’s how a conversation could play out:

Name. How do you spell that?

Spouse name? And how do you spell that?

Address? How do you spell that street and what’s the zip again? I can’t quite read your writing.

Can you confirm your birthday?

During conversation, be sure to say things like how many kids do you have? Oh, I have kids, too. What grade are yours in?

IMPORTANT: If you’re taking their information verbally and typing it into the computer, make sure you look at them! It’s easy to bury your head behind the screen. If you do that, you’ll miss the hot spots in their reaction.

The complex questions get easier to ask with business loans. Of course, you’ll ask the standard info. But, drilling down on the details of how they’re going to pay you back will be revealing. Some of the questions could include:

What are your profit margins the last three years?

How are you going to cover the costs of having two offices since you’re moving out during the renovation?

How exactly are you going to get the business to support your new expanded manufacturing capacity?

Taking the time to drill deep into the complexities of who a person is or how they plan to use the money you loan them will show everything you need to know about the real level of risk you’re taking. Here’s a quick story:

Are they really who they say they are?

One story that sticks in my mind is from early 2009, during a trip to San Diego to a film festival for work. I HAD to spend a torturous 10 days in San Diego in February and I had already been there three days. The hotel bar served the best pesto chicken sandwich on the planet, and I was yet again at the bar for lunch with a co-worker, enjoying one.

We struck up a conversation with a guy, who seemed nice and personable – almost too nice for my taste, and so, my former cop-mind perked up and I started asking myself what was wrong with the picture.

It became obvious he was lying when I asked where he was from – you know, him being at a hotel and all – and he said Colorado. I told him, so was I, and inquired whereabouts in Colorado he was from… “Denver” he said. Me: Denver is a big place … I said “Denver, south Denver? Downtown? Littleton?” Him: “yes, Littleton!” I said “Cool, I grew up in Littleton. Where in Littleton?” Him: “you know, right in the middle.” Me: “Okay…like near Columbine?” Him: “Yeah, right there!” Me: “Oh, yeah…I love that area of town … what’s the name of the park right there?” I asked that, knowing that anyone from near Columbine would know the name Clement Park. Of course, he had no idea and I decided to end the conversation shortly after that.

A few minutes later, there were two San Diego Police officers standing behind him who proceeded to arrest him. Turns out, he was staying at the hotel on a stolen identity and paying for everything with a stolen credit card.

Thankfully, I didn’t accept his offer to buy my buddy and me a drink.

Want to get a copy of How to Detect Lies, Fraud and Identity Theft for yourself?
Just $14.95 + shipping (and that’s the truth)