Want to interview Traci?  Sure you do!  Just email her directly traci@tracibrown.com.

You’ve seen her on NBC, CBS and FOX as well as in Time Magazine, The Wall Street Journal, The Dallas Morning News, The Seattle Times, Good Housekeeping, Women’s Day and Marie Claire just to name a few.

And when you can’t get enough of Traci, she’s got her own media projects as well.  She’s the executive producer of a new TV series, Truth, Lies and Coverups.  Here’s the trailer:

And of course, listen to her Truth, Lies and Coverups Podcast 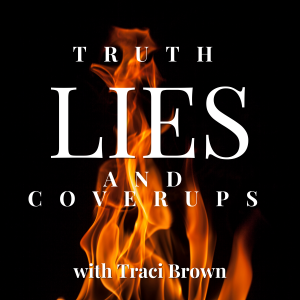 Episodes  include fascinating conversations with criminals, victims and law enforcement. From their jaw-dropping stories you’ll learn what to do to find the truth and protect yourself from personal and business losses. Listen or Subscribe on Apple podcasts Here

Here’s a list of some of the episodes you’ll find.  If you’d like to see the interview video or read the transcripts be sure to check out my blog.

Think Like a Fraudster with Tony Sales, Britain’s Greatest Fraudster

Inside Investment Fraud with Chuck Gallagher

Fraud in the C-Suite with Jeffrey Hayzlett

The Psychology of Being Defrauded- Christine Parma

Finding Fraud Right Under Your Nose with Susan Frew

Inside the Italian Mafia with Marisa Merico, Mafia Princes‪s‬

The Fear Factor with Carol Cambridge

Inside Cybercrime with Brett Johnson the Godfather of Internet Crim‪e‬

The Good, Bad and Ugly about Hacking with Brian Sel‪f‬

Legal vs. Ethical. Inside Enron’s Collapse with Cindy Olso‪n‬

Behind the Scenes Secrets: Body Languag‪e‬ with Tonya Reiman