Body Language: Your Key to Surviving in a Post-Truth Era

There is a lot of information in a handshake.  Trump has a habit of offering his palm up to shake which says he wants to be open, warm, agreeable and welcoming.  Then once he has the hand in his grasp, he turns his palm over so it faces down, which says he needs to be in control.  Then he literally yanks the person off their feet.  It’s happened over and over which says to this expert that, like most other handshakes anyone gives, it’s a deeply unconscious gesture that tells us exactly what his deep unconscious needs are.  In this case, it’s to be completely in control and keep others off balance.

But then last week the tables turned when he met with President Emmanuel Macron of France before the start of a meeting at the U.S. Embassy in Brussels.

And in that moment, the message was silently sent:  Don’t mess with me, Trump.  I mean business, control is mine. 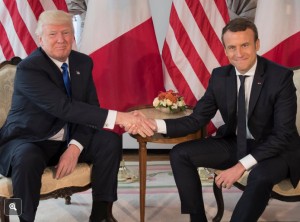 This may seem like a moment in time.  But body language tells happen very quickly and are deeply unconscious. They speak volumes without saying a word.  As with anyone you see on TV or anyone in your life, believe it the first time.

Macron said of the shake:

“My handshake with him, it’s not innocent,” Macron said. “It’s not the alpha and the omega of politics, but a moment of truth.”
He added: “One must show that we won’t make little concessions, even symbolic ones.”

In the post-truth era we’re now living in politically, body language is the one thing that you can trust to reveal the truth and help you survive the times.
Listen to what people aren’t saying–the body can’t lie.  Then you’ll find the truth for yourself–no spin, no commentary, just the facts.